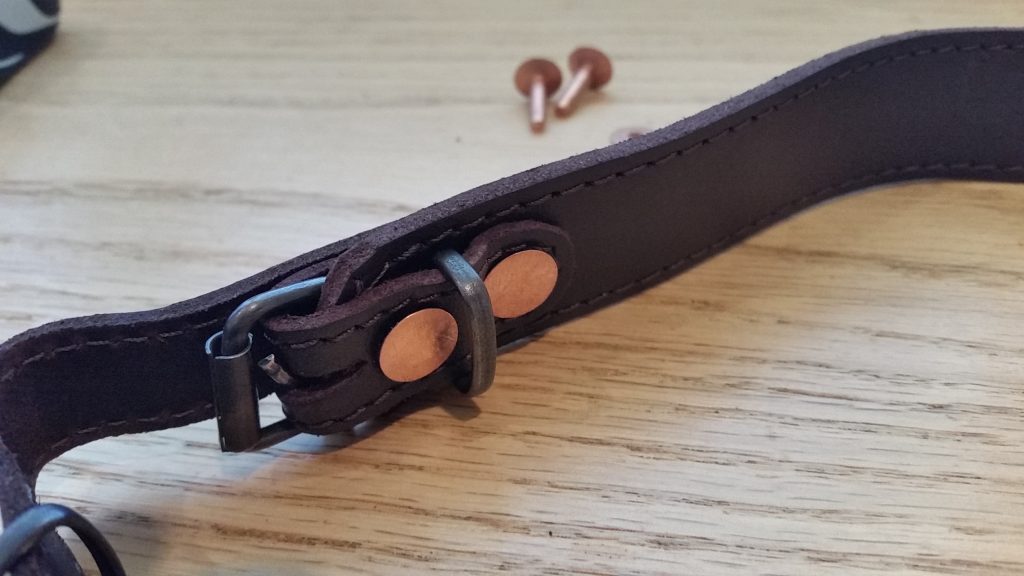 My leather rifle sling was a little too long, and made the rifle awkward to carry. I bought it from abroad inexpensively, and figured it would need work. Truthfully, I couldn’t buy the raw leather materials in the USA for anywhere near as cheap as I bought this leather sling finished. I figured I would have to remake the sling anyway, so just having to shorten it isn’t ll that big a deal.

Fortunately the sling was actually fairly well made, just too long. I drilled out the factory rivets. I un-stitched a long length of thread, and left it attached to re use after trimming. I used a small drill bit and a vintage hand drill to make some holes for stitching. I also used a larger drill bit to make new holes for rivets. I originally wanted to do this project quickly, because its already deer season, and hoped I could just plug in some chicago screws. However, nobody nearby had chicago screws, and I resorted to copper rivets. I even pulled out my grommet tool(seen in the pictures) thinking I had a ‘long-enough’ brass grommet I could use, but I didn’t. It wasn’t a big deal, just a little more work to set rivets. I set the rivets, and peened them with an old ball peen hammer from my vintage tool collection that needs some restoration work.

The end result is strong, probably stronger than the original rivets and connection points, and a sling the fits me and my rifle well.