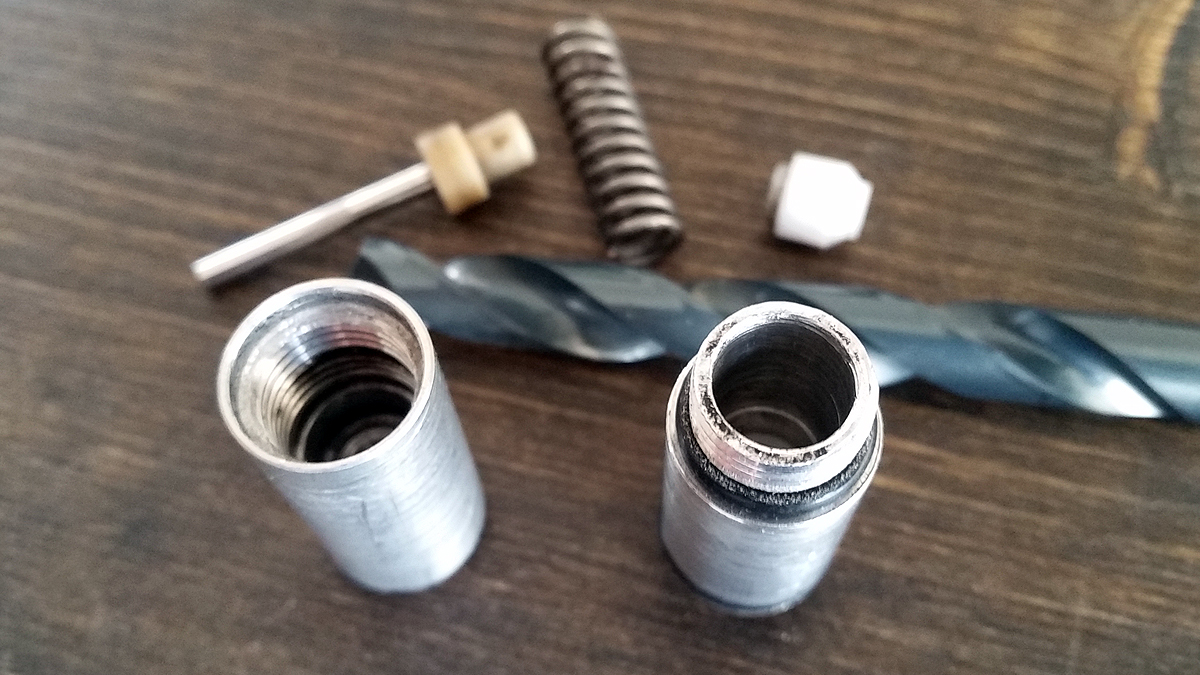 Looking for a simple 1322 Power Mod? With a steel breech, the Crosman 1322 can be over pumped for more power. However, a larger air volume will increase the amount of energy the 1322 can store. Longer and better valves, like the Alchemy Airwerks valve, can achieve an increase in power, and can be purchased on eBay.

There is a crude DIY method to increase volume about 7%. It requires a 25/64 drill bit, a drill press, and a drill vise.

Trying this DIY method of increasing the cylinder valve’s internal volume can ruin your cylinder valve. You can also hurt yourself if you aren’t careful. Its not something that should be tried without a drill vise, and drill press. Sportsman’s Magazine and its authors, are not responsible for damaged parts, or injuries that result from using the 1322 power mod mentioned.

Frequently check the depth, or measure and set a depth gauge if your drill press has one. Drilling too far will destroy the cylinder. Crosman 1322 cylinder valve before being bored out for a 7% increase in internal air volume. Crosman 1322 cylinder valve after boring out material with a 25/64″ drill bit.

The Crosman 1322 is a favorite platform to modify and tinker with. Our simple 1322 Power Mod uses stock parts and some precision drilling, to achieve a 7% increase in air volume. It won’t make your Crosman 1322 twice as powerful, but its one small step in the right direction. Let us know what you think, or if you have any questions.

Valve mods are just one way to squeeze out even more power from a Crosman 1322.

The 1322 is a basic platform with huge potential. Enthusiasts have modified them from the stock 450 fps all the way past 900 fps.

The 1322 is not just a plinker. It can be a very effective for taking small game, upland birds, and dispatching pests. Modified for more power, and it becomes an incredible, compact tool for hunting.