I recently bought a CZ Upland Ultralight Green 2016 in a 20 gauge for my girlfriend as an early Christmas gift. I shopped around, looked for the literal best bang for the buck, but also wanted a light shotgun with lesser recoil that my girlfriend could carry and use to hunt chukar and grouse. I considered a 20 gauge Benelli Montefeltro, because I own and love my 12 gauge Montefeltro.

My girlfriend and I talked about a preference on actions, and she expressed that she would be more comfortable with a break action than she would a semiautomatic action.

Besides the break action preference, I knew we needed to find a good compromise between recoil, and the ability to tote the thing around without getting fatigued. She’s a little petite, and a 12 gauge seemed like it might be too much recoil to be enjoyable and too heavy to carry all day, so we decided on a 20 gauge.

My girlfriend ultimately made the decision, and CZ made it a no-brainer. While looking at side by sides and over unders in a 20 gauge, my girlfriend saw the green anodized receiver of the CZ Upland Ultralight ‘Green’ shotgun.

Check out CZ over under shotguns at Sportsman’s Warehouse

I checked it out and it seemed like a great fit. Its an attractive and lightweight 20 gauge over under, with a nice stock, and an affordable price tag. Because I had never owned a CZ shotgun I felt like I was taking a chance, albeit a small risk, but went ahead and bought it for her anyway.

We received the Upland Ultralight at a local FFL. The initial inspection was sort of an eye opener. The shotgun met and exceeded all of my expectations. Its led me to believe that CZ’s are completely under-appreciated or under-considered firearms in the US market.

It doesn’t just look great, it shoots great too. Its fast to shoulder, the trigger was nicer and lighter than I had expected, it can be shot all day without fatigue, and its light enough to tote around for a while. Most importantly, my girlfriend loves it, and is comfortable operating it.

I love my 12 gauge Benelli Montefeltro. I have zero buyers remorse, no intention of replacing it, use it all the time, and enjoy shooting it. With that said, if I had handled and shot some CZ 12 gauge shotgun options prior to buying my Benelli, there might have been a CZ shotgun instead of a Benelli shotgun on my side of the gun rack today. 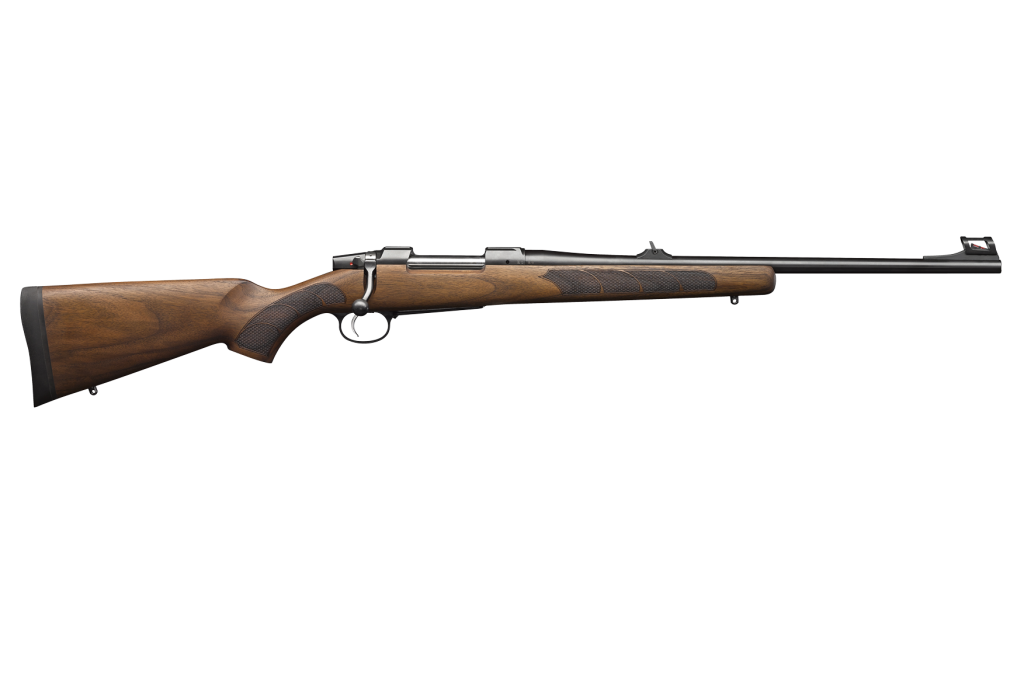 I recently acquired a CZ 557 Carbine Rifle chambered in 270. I was looking for an accurate medium and big game rifle chambered in .270. Specifically, I wanted an accurate, durable rifle with a quality carbine length barrel, fixed sights, a good trigger, smooth bolt operation, and good furniture.

I found all of that with the CZ 557 carbine. The 557 action is a departure from the Mauser style controlled feed used in CZ 550 model rifles. The action of the 557 is a push feed bolt design with dual locking lugs, a plunger-type ejector and short extractor, housed in a steel receiver machined from a single billet of steel. It also features a trigger that breaks very cleanly. The oil finished walnut is attractive, the checkering clean, and the fit to the nicely blued receiver is great. The magazine is a fixed 4+1 with a hinged floor plate, and the barrel is cold hammer forged with a 1:10 twist. CZ does some interesting stuff to create both accurate and durable barrels from the factory. Its worth checking out the CZ site and reading up on it, but not the point of this post.

The front sight is a fiber optic sight, protected by a shroud designed to let light in, but 19mm CZ style dovetails on the receiver do allow the rifle to be scoped.

The CZ 557 is a discontinued model as of 2016, so I felt like I would regret not buying one in a year or two when stock was all gone. Its a classic looking rifle with some modern changes for CZ. Besides using a push feed action versus a controlled feed, CZ has done away with the set trigger from other models in favor of a light and crisp trigger that breaks cleanly with about 3.5 lbs of force, from the factory. It may actually be the best factory mass produced and shipped trigger on the market.

I decided on the CZ 557 chambered in 270 because a range of modern and affordable ammo exists for it, compared to say 7mm 08, and its a relatively fast and flat shooter, with a lot of energy. The gun shoulders nicely and recoil is very manageable with both 130gr and 150gr ammo. Fast target acquisition is made possible with the fixed sights, and a smooth bolt operation males quick follow up shots easy.

Sure you can get a budget Savage or Ruger American, or both for the street price of a CZ 557, but both of those guns feel like what you paid for them, and use a lot of plastic, whereas the CZ feels like a much more expensive gun with much nicer furniture.

I bought the 557 for $620, but the current street price is just over $700. At that price, its still an exceptional gun. I’ll replace a few of the above photos with better ones as soon as I can. In tho photos above I included a group of 3 150gr shots taken at about 55 yards from a knee in the snow, off of a wobbly bipod. The rifle is more accurate than my group would suggest, but given the conditions, poor rest, and and it being some of the first few shots taken with the gun, I think it shows the quality and shootablity of the gun, unscoped, in marginal conditions.

The Truth About California’s Ammo Laws

Benjamin David | January 9, 2017
Photo Credit: Keith Knoxsville
A Hen and a Drake Green Teal on the truck bed. Not a limit on anything, but a fun morning out. The truth about California’s ammo laws, is that they are complete bullshit. They don’t work, haven’t worked, will continue to not work, will make criminals of law abiding citizens, and infringe on the Second Amendment.

For the completely uninformed, California passed bill SB53 among a slew of other anti second amendment laws, requiring residents pay $50 and submit to a background check to acquire an ammo purchasing permit. Those who pass will be on a list of persons approved in the state of California to buy ammunition through Federally Licensed Firearms dealers only.

Firstly, around 40% of gun transactions in America won’t go through a background check. That’s not to say they are illegal transactions, they just may not have happened somewhere requiring the check. Like what commonly happens in a private sale in a free state, between friends, acquaintances, and family members.

California criminals have ready access to firearms trafficked into California, regardless of California’s best stupid efforts. If a criminal doesn’t acquire a firearm by this method, they can buy a gun on the black market. Such guns are often stolen guns, or foreign and reproduction ghost guns slipping through Customs and Border Control.

The unknown selection method for customs and border control ultimately allows between 95% and 97% of cargo to enter the country without inspection. That’s right, they only inspect 3% to 5% of cargo.

Gangs traffic guns from state to state, county to county, commit crimes, and make it very difficult to match ballistics to guns that law enforcement officers don’t know to look for and don’t know exist, or don’t exist because they have been resold and moved after a crime.

The loop holes, and violation of laws already on the books are what make criminals criminals. They simply disregard them. Old laws, and new laws don’t affect them, they just make it increasingly difficult and expensive for the law abiding citizen to exercise their second amendment right.

Add the extra $50 annually to buy ammo, the law abiding citizen will be limited in the number of rounds they can purchase, and soon will also have to abide by lead free ammo laws. For the completely ignorant, non-lead ammo is harder to acquire as the availability and production is limited, and averages double the price of lead ammo.

If I wanted to take my bolt action hunting rifle to the range before the hunting season and sight in a scope, shooting three lead free rounds would cost a $50 background check for the year + $2 per round. In the best scenario it takes 3 rounds to sight in a scope, but the realistic scenario is that you will go through a box of 20. That’s over $40 to ensure accuracy with lead free ammo. For a total of $90. Without the background and lead free ammo, it would cost me $21 dollars. Such costs will push otherwise law abiding citizens to buy ammo across borders and traffic it back.

If all liberals had to pay $50 annually to express their opinions, and even more restrictions and costs were placed on what was allowed to be said and how large the audience, the hippy dippies would undoubtedly cry in their safe spaces about their first amendment rights being violated.

Gang violence will not be curbed, mental health will not improve, and criminals will not comply with any gun or ammo law. They have no regard for them, never have, and never will. Getting tougher on criminals might do the trick, but California would rather harbor illegal aliens, house them in local jails at the cost of the taxpayer, or release them onto the streets at the safety of law abiding citizens.

The laws that California passed regarding ‘assault rifles’, ‘illegal features’, magazines, and now ammunition, are clear violations of the Second Amendment, “…the right of the people to keep and bear Arms, shall not be infringed.”.

California identifying ‘features’ of firearms as being dangerous to its citizens and therefore making specific ‘evil guns’ illegal for California ownership and possession, is a method of circumventing federal and constitutional laws protecting citizens’ rights to bear arms, and makes criminals out of good people.

Such circumventing is not clever, nor is it effective. Other states with similar bans, voluntary gun registrations, and forfeitures, have proven that second amendment advocates and gun owners will not comply with state laws that clearly violate their second amendment rights.

The end result is angry ‘non-compliant’ law abiding citizens and gun owners facing a higher cost of freedom, infringed amendment rights, citizens possibly being charged as criminals, a false sense of safety among the liberal idiots that voted for this crap legislation, and crimes that will continue to be perpetrated by criminals unencumbered by any new law.

The disillusion will be clear to even the most ignorant anti second amendment liberal, when they are the victim of a crime, and the only recourse is to be a victim and wait for law enforcement to show up with guns.

That is the real truth about California’s gun laws, the folks writing and passing this crap probably know it too, but are more concerned with looking like they did something for their liberal voter base, collecting more taxes and fees to piss away on failed budgeting, and looking like they are tough on crime. Its the political move for votes, nothing more. Whereas the most beneficial move to the public would be to enforce laws already on the books, and treat criminals like criminals, not make new criminals out of law abiding citizens that prefer not to be victims.