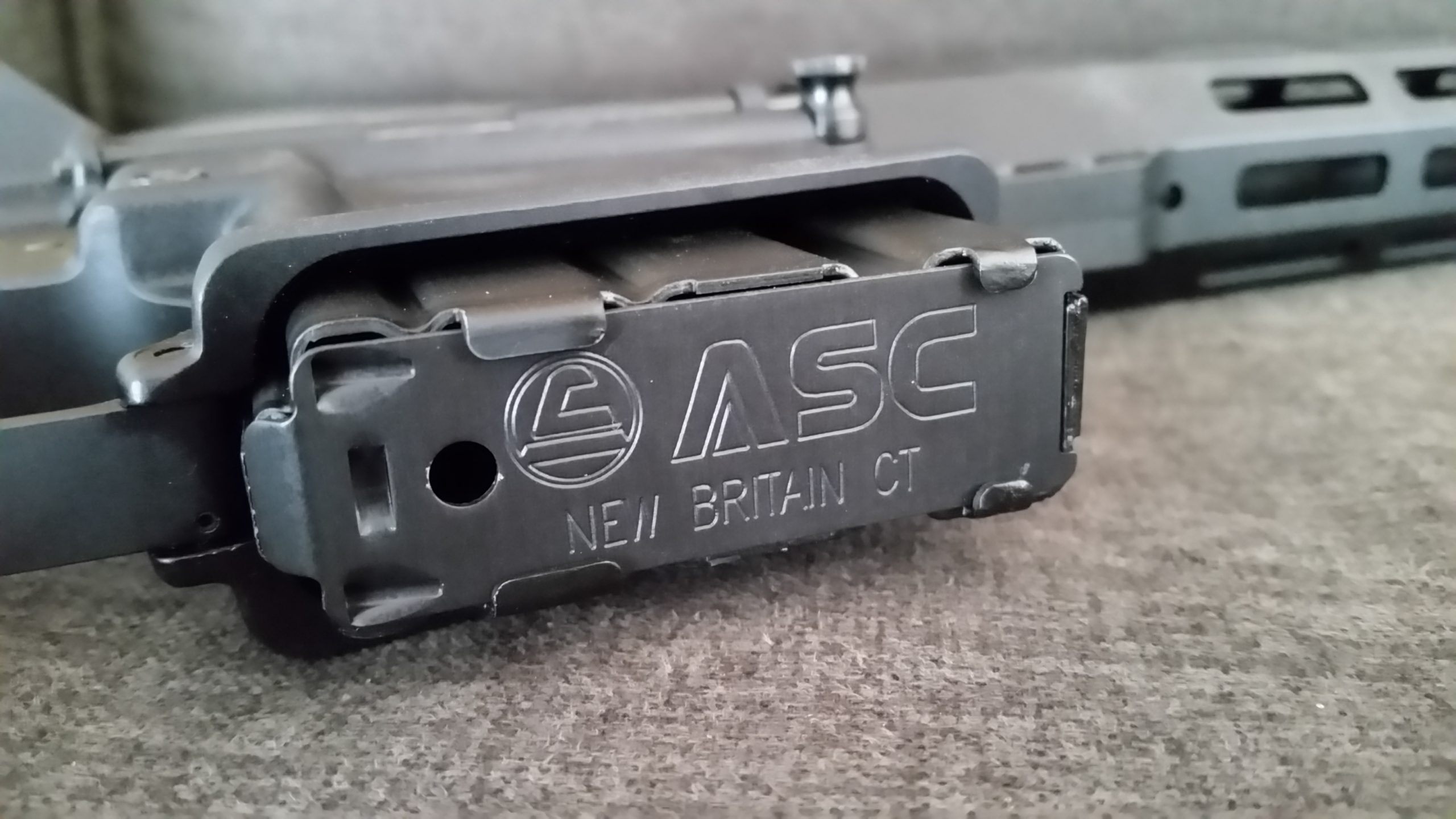 These ASC 10rd magazines are a great running magazine, they work without issues, and lock the bolt open on empty every time. I have zero feed issues, no fitment issues, and at 10 rounds are perfect for restricted states.

The construction is solid aluminum, and is nicely coated. I’m not sure if its anodized or painted, but it seems to be wearing well, and operates without issues. 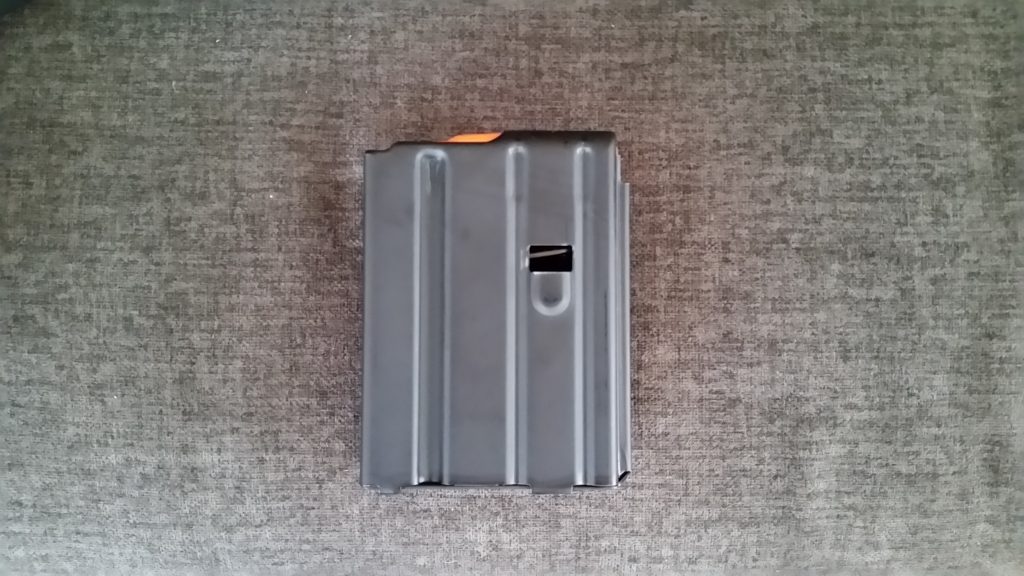 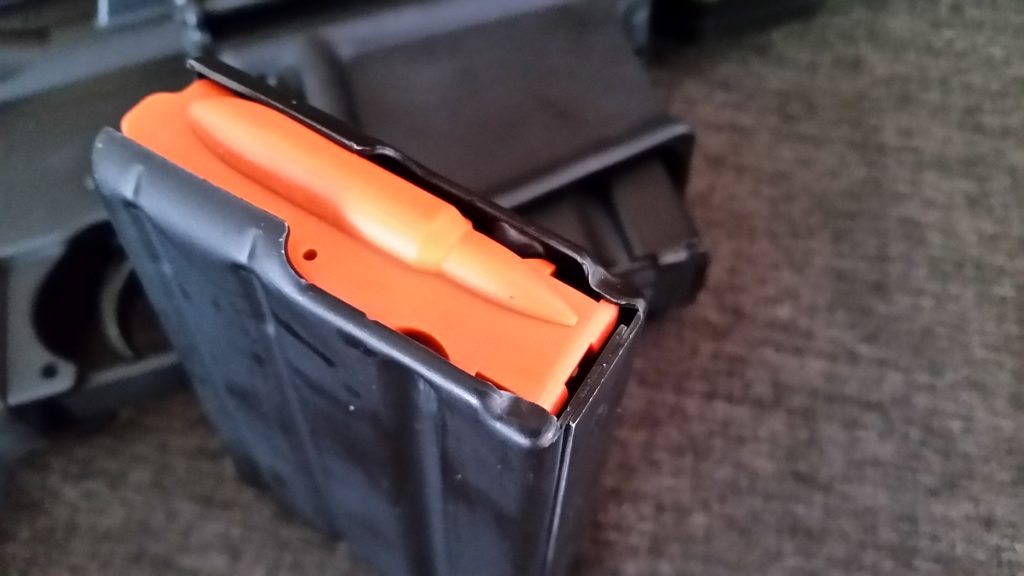 There isn’t a whole lot to say about a 10 round magazine. It’s not a mag you would use in a free state, and not one that any major magazine pouch, belts, or vest or carrier designs for. However, until California wins assault weapon and magazine capacity lawsuits, and thank God we are close, these work, are reliable, and affordable.

Not sure what else you need. They aren't as tacticool as a giant banana mag. But I care about function, and they function well.

When the CA stay on standard capacity magazines is lifted, I plan to give ASC a try in larger capacities. 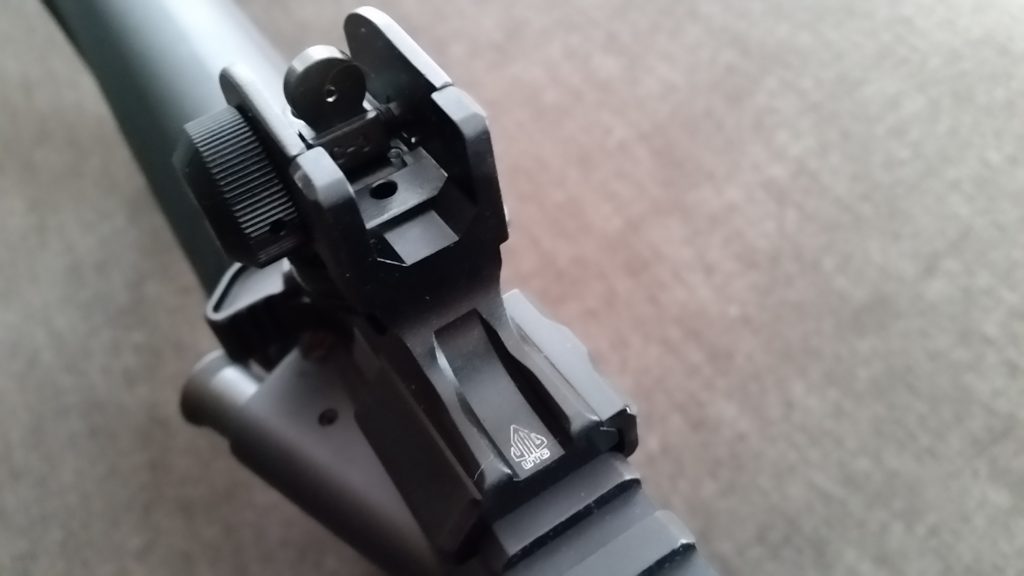 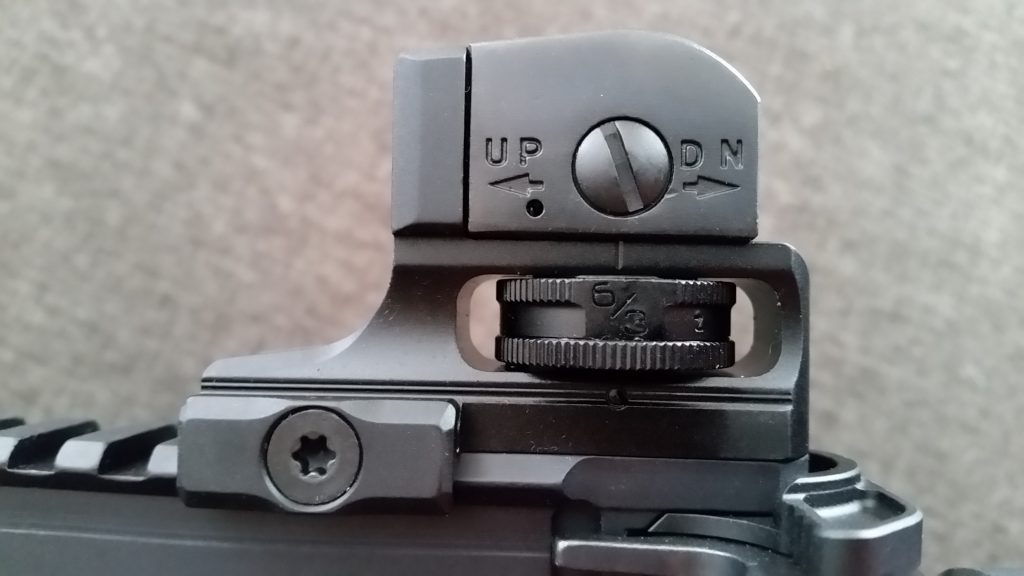 The Super Slim A2 Sights by UTG were exactly what I was looking for. They are solidly built, mount squarely with included Torx screws, and use standard heights for flat top handguards and uppers. 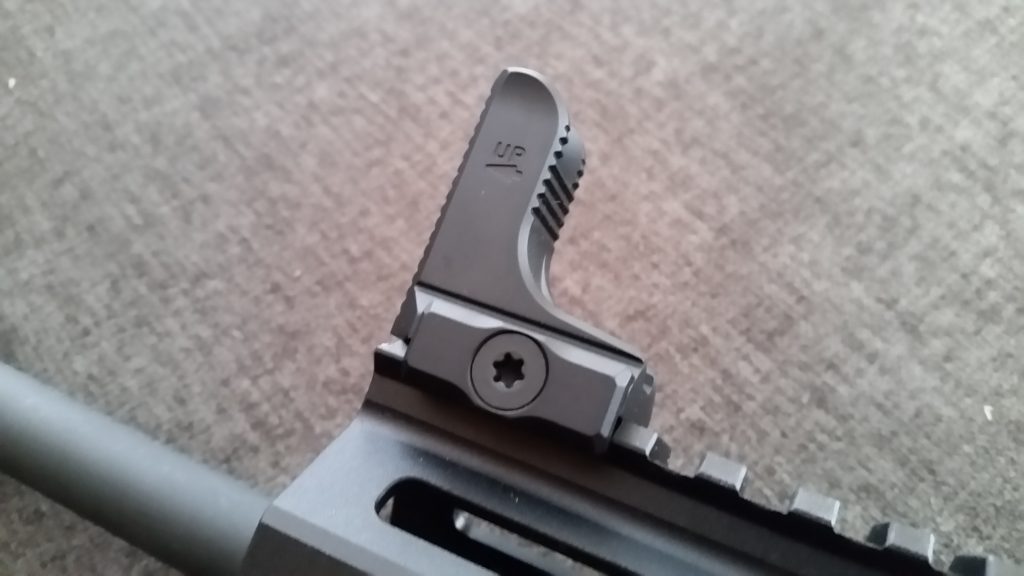 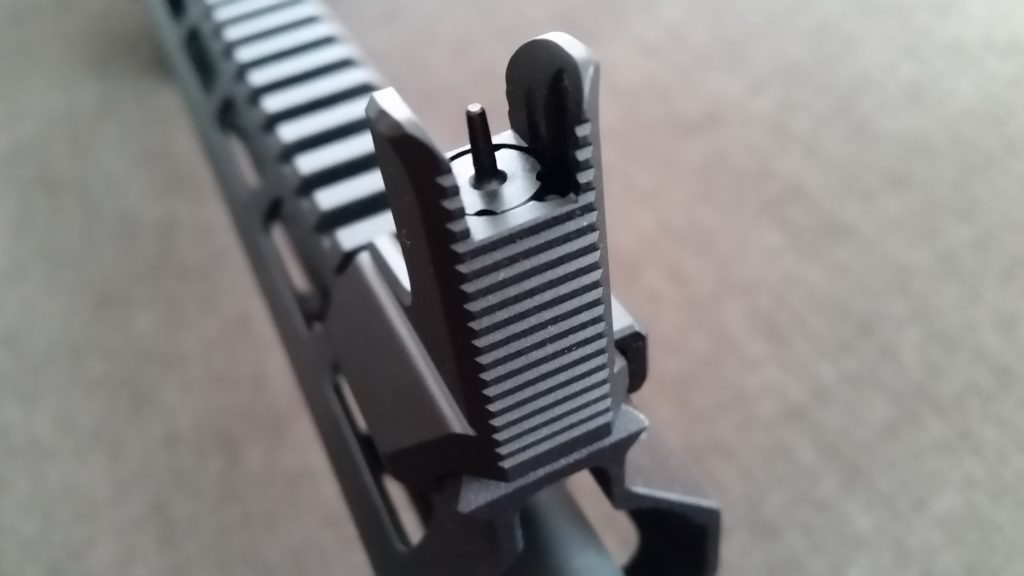 The Leapers UTG sights are very cleanly machined, well designed, and very sturdy. The tolerances are tight, and they co-witnessed perfectly with a Bushnell TRS-25 red dot sight on a compact .83 inch UTG riser mount.

These fixed sights are as good or better than sights over 2 times more expensive. So it’s no wonder these things are always sold out. An alternative may be the front flip up version by UTG or the rear flip up sight but if you see the fixed sights available, snatch ’em up in a hurry.

The quality, for the price point is incredible. I'd have a hard time justifying spending more on other brands, when UTG offers such great value to nearly any budget.

They are always sold out or out of stock, for good reason. So if you ever see em in stock, snatch 'em up while you can. 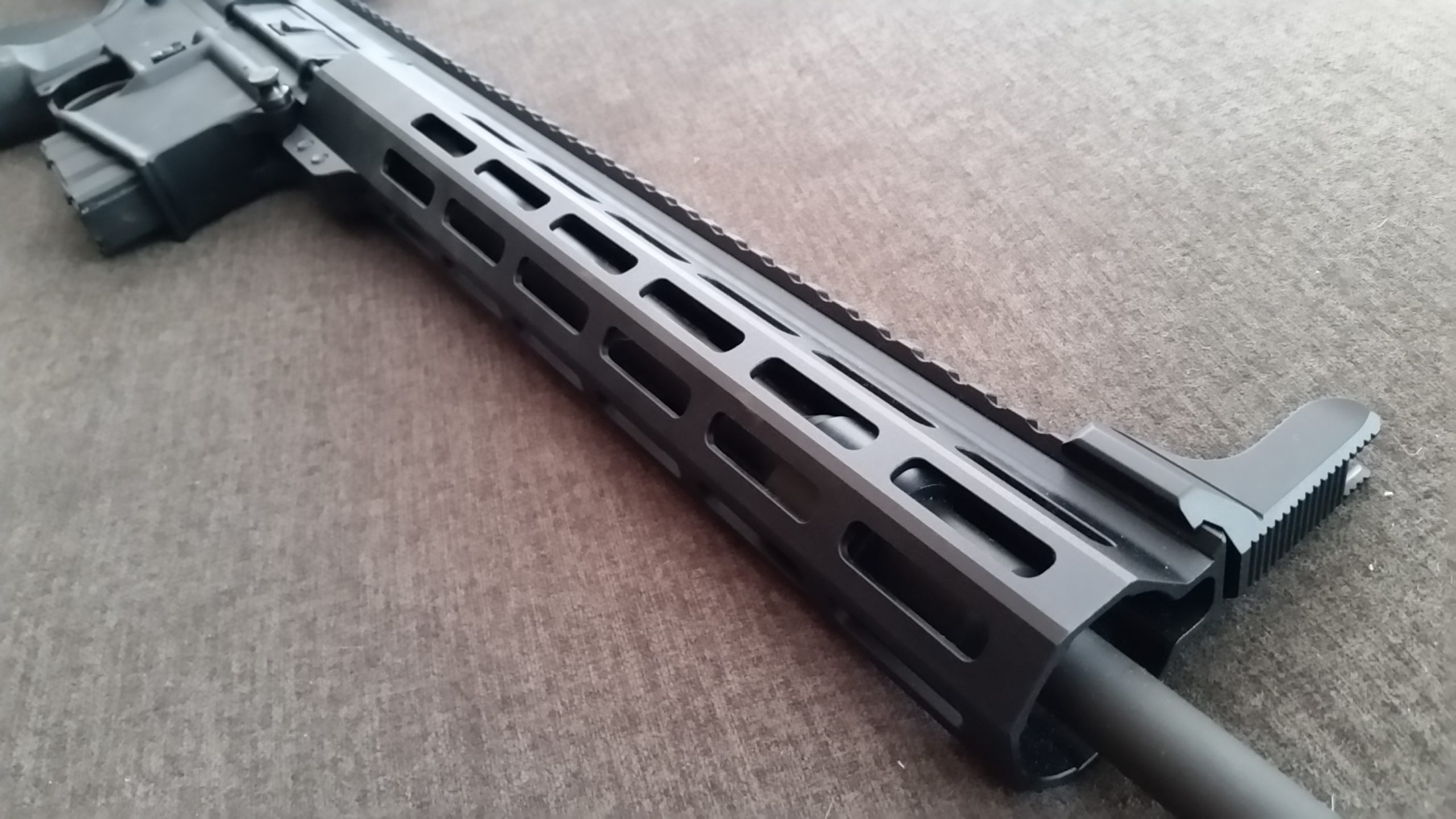 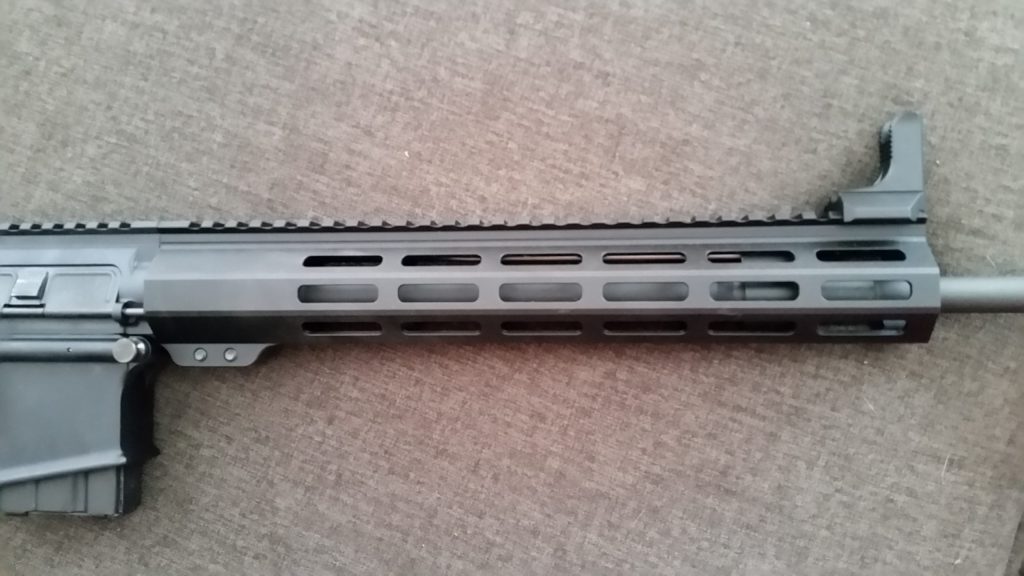 The NBS Free Float M-LOK Handguard is an American Made handguard. It features a monolithic rail machined from a 6061-T6 extrusion. The finish is a type 3 hard coat anodizing.

The handguard is relatively slim, feels pretty good in the hand. It fit cleanly over a standard low-profile gas block and features 7 sides of versatile M-LOK attachment slots. The handguard also included a barrel nut, which required no indexing! It makes it easy to properly torque the nut and even easier to install the handguard over it.

After installing the NBS Free Float M-LOK Handguard, we took our AR-15 to the range. Handling with the 12″ handguard was good. The rail is slim enough to get an okay C-grip. Instead of blasting a few thousand rounds of ammo through the AR, we dealt with some reload issues. We discovered that our .223 reloads had slight deformations under the shoulder, causing bad chamberings and feeds. The handguard got a beating while we tried to chamber and extract the rounds.

After changing out ammo, we spent time shooting with the NBS Free Float M-LOK Handguard. It worked well, felt good, and never moved on us. Even after the abuse.

We really couldn’t find any issues with the NBS. It’s manufactured well, has a nice finish, it did its job, did not move, and was more than we expected from a budget handguard. It’s not a premium handguard, but it is also a fraction of the price of a more premium handguard.

The NBS Free Float M-LOK Handguard is a great value, backed by a lifetime warranty, Made in America, and uses a non-indexing barrel nut. It is a good handguard for the price. It looks decent, and we’d recommend the NBS Free Float M-LOK Handguard for budget AR builds, but if you are willing to step up in price, you can buy a vastly superior Aero Precision Atlas S-One.

The NBS handguard includes a non-indexing barrel nut. So there is no annoying tinkering with a gas tube. All you have to do is properly torque the nut.

In a restricted state, where fore grips are evil, an ergonomic and slim, yet highly versatile handguard is especially nice. It also keeps things a little bit lighter.

With the included barrel nut, the handguard cleared a generic mil-spec low profile gas block without any problem. 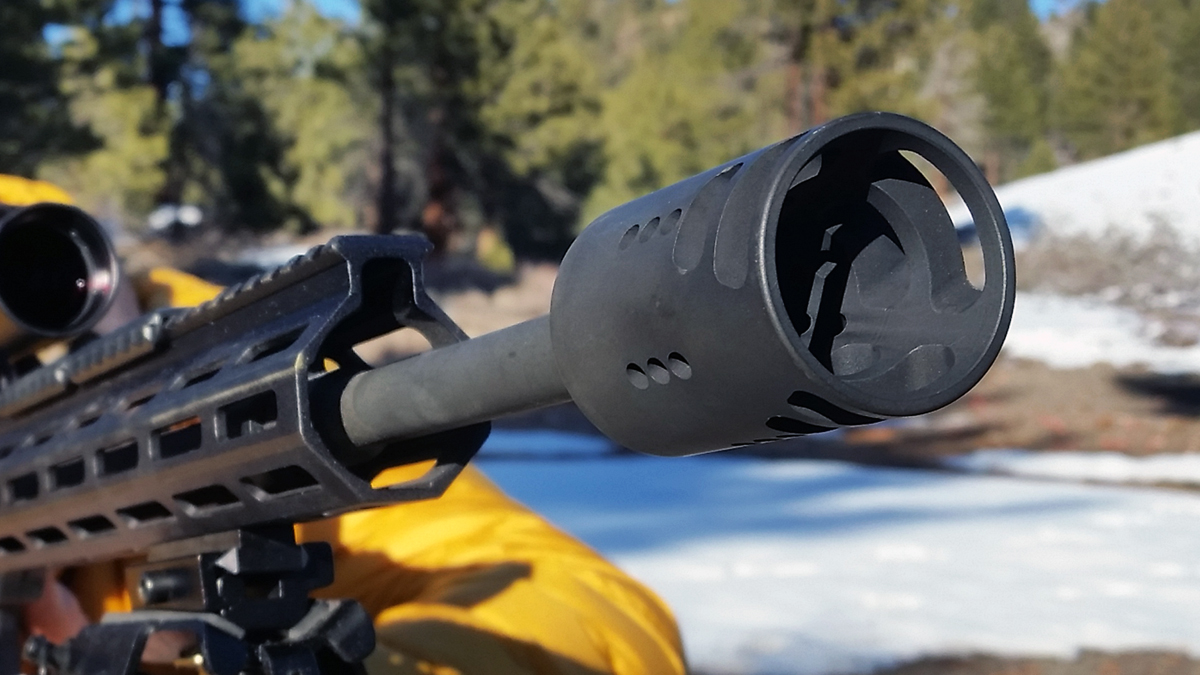 They are meant to work with Strike Industries Cobra Dummy Suppressors, and will fit inside most free float handguard rail systems, as well as directly attach to any AR barrel with a 1/2″x28 thread pitch. They are machined from steel, and feature a mate black finish.

First impressions were good. It’s matte finish is nice, and the quality of the machined steel is very good. Installation onto my AR barrel was straight forward, and the fitment very good. The price of a Fat Comp, is a fraction of other higher priced compensators for very comparable performance. I also managed to achieve the look I wanted.

The Fat Comp reduces recoil by 34% in addition to controlling muzzle flip. If you are interested in reading about the performance data, check out the article at the truth about guns. 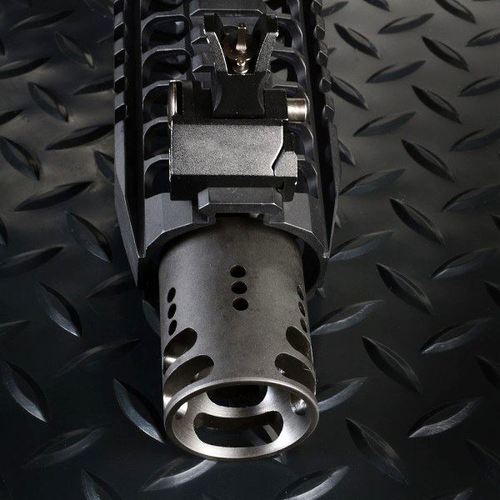 Aesthetic and effective for a great price

Although its a compensator and not a brake, the FAT Comp 2 reduces recoil by 34%

The Price is Right Jack

The Fat Comp 2 is an incredible value for the quality and performance as a compensator, but also at reducing recoil. You'd be hard pressed to find nearly as good a bargain with another product. 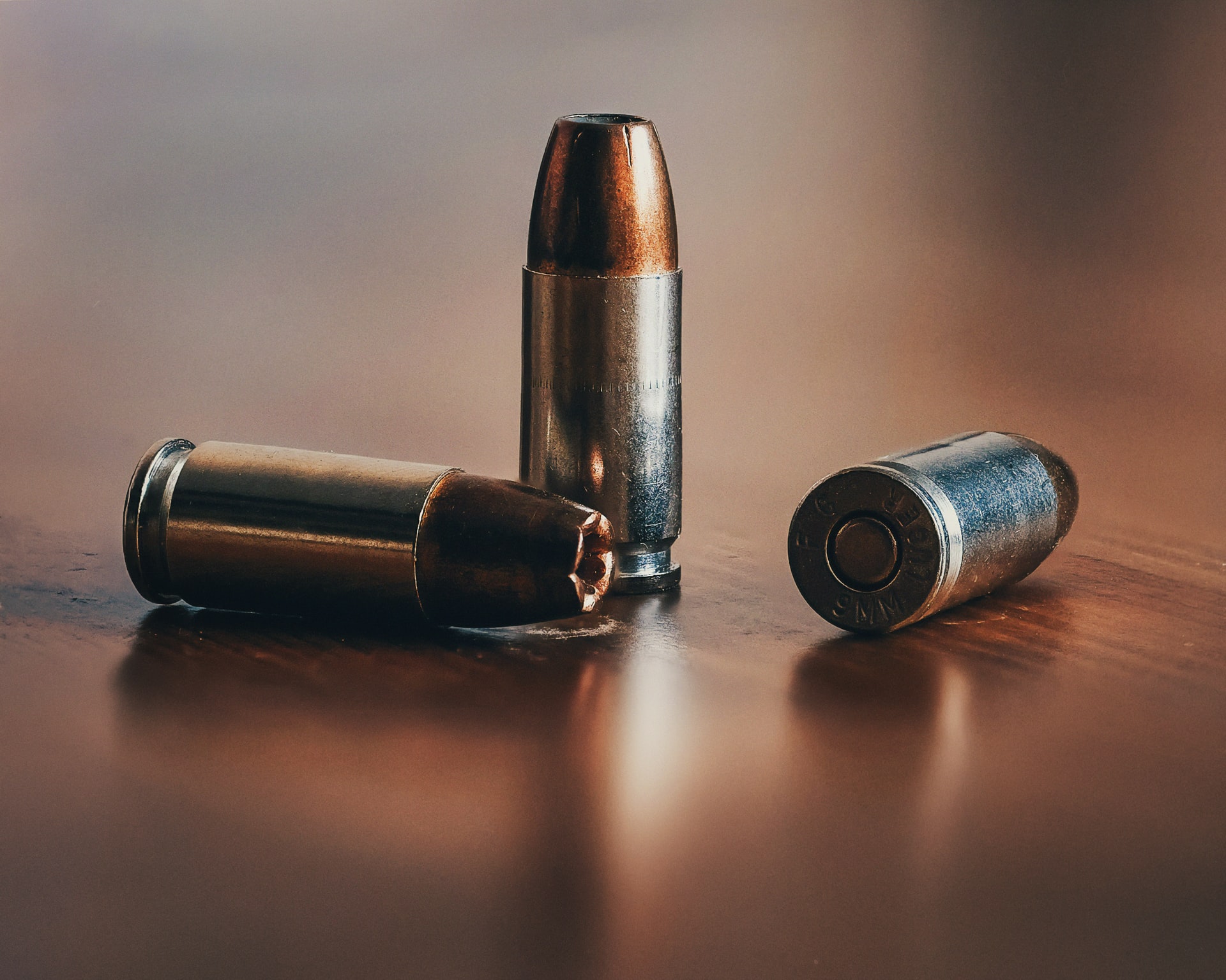 Reason #1: Cost Savings
If you are looking to save money, it will take some volume before you really benefit, but you’ll be able to develop and load high end rounds for cheaper than you could buy them. Range finds, and buying things in bulk or on sale can make reloading ammo more cost effective than store bought ammo. However, cost shouldn’t be the only focus of reloading.

Reason #2: Precision Ammunition
You can produce more accurate, and consistent ammunition, versus off the shelf ammunition.

Reason #3: Availability
You can produce a specialty round that isn’t commonly available, or create a round that is in low supply at retailers

Reason #4: Freedom
If you live in California, you can avoid the ammo background checks and fees. (This is a big perk for me in California, where legislators and idiots are constantly trying to take away or infringe 2A rights). Background checks add to the cost of ammunition, and upfront fees to buy ammo from a store you aren’t on record already is an egregious 20 dollars.

My Big Game Hunting Round. Used for examples below.
I experimented with powders, seating depth, and settled on a load for my 270. It’s a 140g Barnes TSX, doing 3100+ fps and around 3000FPE at the muzzle. It doesn’t recoil badly, isn’t even the hottest load I could run, and is producing accurate results. When I put a highend name brand round with similar ballistics through a chronograph, it performed over 300fps slower than advertised. So even when you pay for a premium round, you may not be getting ammo that is nearly as good as you could create.

Equipment Cost Breakdown(All Available in one stop at Brownells)

I bought stuff on sale, price shopped a couple other places, even 3D printed stuff, and got all of the above for $172.65.

So for a ‘specialty’ lead free hunting round, my reloaded ammo cost a little more than half that of a commercially available round, but I can be assured of performance, and quality.

My example focused mostly on a centerfire hunting round, that uses premium bullets and a magnum rifle powder, and not bulk shooting rounds. For bulk reloading it’d be wise to read what you can about a turret press, which is faster at creating bulk ammunition, than a single stage press would be. Reloading ammo in smaller calibers like 5.56/223 could be much cheaper, based on powders, and the use of copper jacketed lead bullets.

If you are on lock down because of the Coronavirus, why not load a few thousand rounds.

In restricted states, where they have passed background checks and fees, on ammo purchases. You can reload almost whatever you'd like, in whatever volume you'd like. 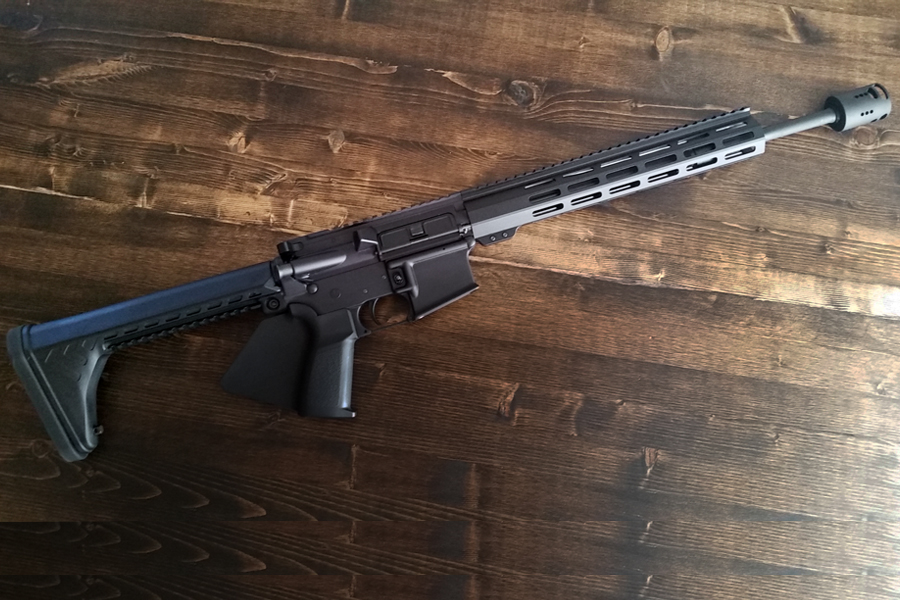 Legally own an evil AR, even if you live in California, just build it featureless! The general rule is no features, no problems. Hence the name featureless. Or you can register your AR for 20 bucks, and be on a DOJ list forever. Or you can refuse to comply, and risk becoming a felon.

None of this is news, but for all the FTGBs(first time gun buyers/builders) out there, this is meant to be a simple breakdown on how to build a featureless, CA legal, rifle on the AR platform in California.

First question that you may have, “But what if I have a bullet button?” The rules keep changing to match the engineering of firearms. Even the idiot politicians and anti-gun lobby manage to trail behind the tech as it changes. Basically, unless you detach the upper from the lower, (IE: disassembly) you are non-compliant. There are workarounds, but why roll the dice with a law enforcement officer within a narrow margin of the law, and/or constantly wearing down your takedown pins.

Keep in mind, these are guidelines, that at the time of writing April 1 2020, are accurate to the best of my knowledge. They are guidelines, and not legal advice. You do what you are going to do at your own risk.

So what the featureless rules mean, is get rid of the following:

So skip the CA DOJ BS of registering. Unless you trust they’ll take you off a list later, should you ever get to completely exercise your Second Amendment rights, in the Golden State ever again.

How much does it suck?

The standard muzzle attachment, isn't my favorite. I prefer a muzzle device that adds to the practical function of my firearm.

There are 30rd mags, that are pinned at 10 rounds. If SHTF, or laws become practical again, you can remove the pin that prevents the use of the 30rd capacity.