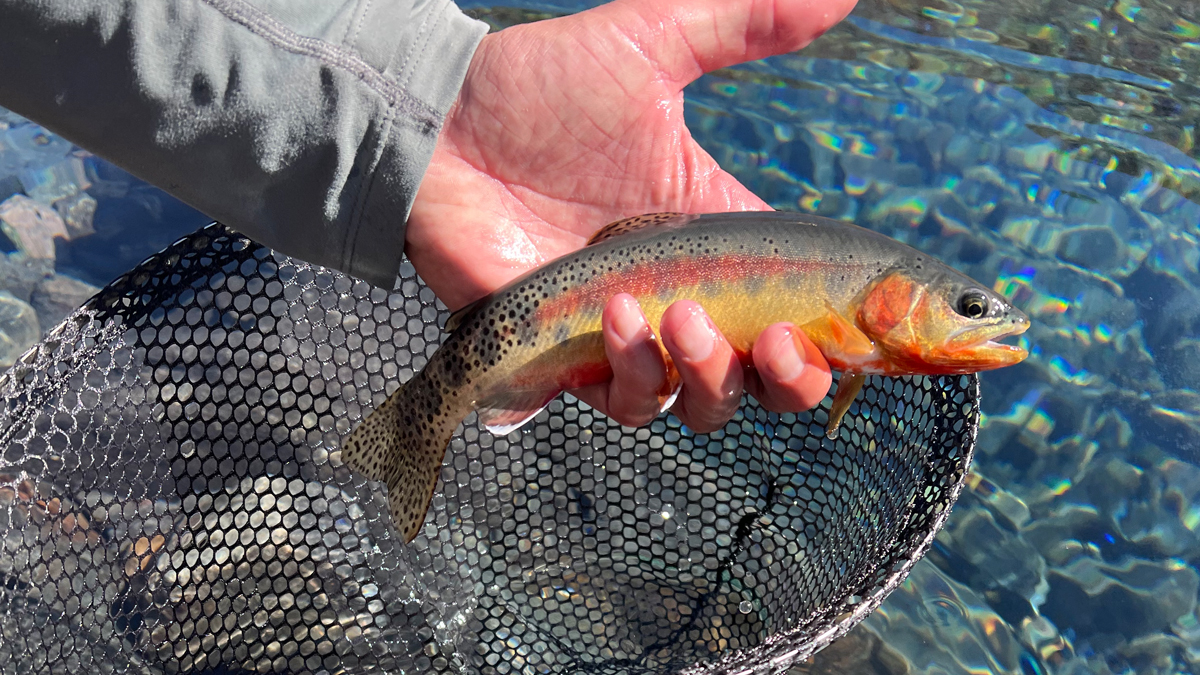 It has been a strange summer here in the Eastern Sierra. We’ve had prolonged periods of above-average heat broken up by a very wet, cool mid-summer. By mid-July, fires were starting in Yosemite, smoke was settling over the high country, and it appeared that our fishing season may be cut short. Then, the monsoonal showers started rolling in almost every afternoon, helping to get the fires under control and clearing the smoke. Now, we’re back to typical Sierra weather with clear days and hungry fish waiting in the alpine lakes! 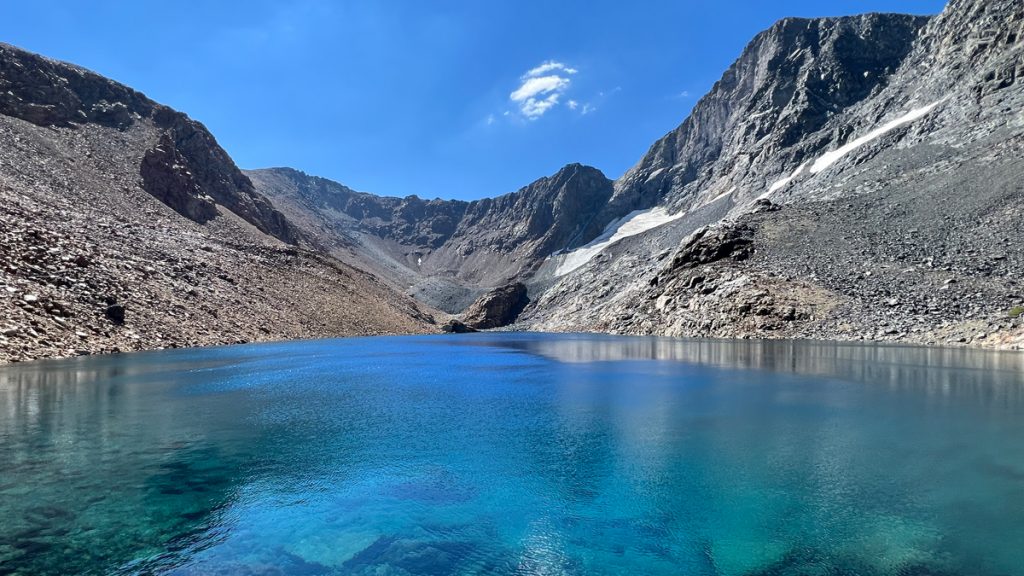 Crystal blue waters make alpine lakes some of the most beautiful bodies water you’ll ever see, and are well worth a hike.

I have been a big fan of using a double dry rig this season. On most outings, I’ve used a large October caddis tied about 18 inches above one of the smaller dries I mentioned in the previous paragraph. This seems to draw more attention when fish are actively feeding and occasionally drawing in the bigger fish that may not be as interested in the smaller fly. The downside to this rig is that fish sometimes become tangled or hooked in the body during the fight, so a barbless hook and a net are a good idea if you’re planning to catch and release.

The forecast for Labor Day weekend calls for very high temperatures and alpine lakes are a great way to escape the heat. Dry fly fishing should still be good, likely best mid-morning and possibly in the evening. While it will be much cooler than at lower elevations, the high country will still be warm and the sun intense. Be prepared for this by carrying plenty of water and protecting yourself from the sun. It’s always a good idea to wear a long-sleeved sun shirt, hat, and carry more water than you think you’ll need. You might also consider carrying a Sawyer Squeeze filter or life straw.

After the holiday weekend, it will likely start to feel more like fall in the High Sierra, and the wildfire season could take off at any time. Fall weather means the end of prime dry fly fishing up high and brings on better fishing in middle and lower elevation lakes and streams. So if casting dry flies into alpine lakes is your style, then get into the mountains and get it while you can! 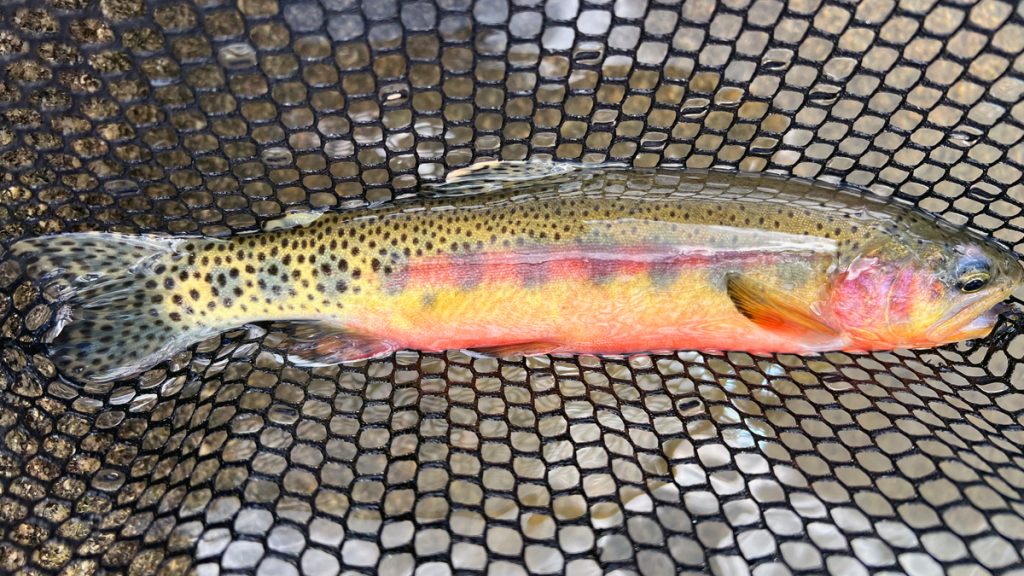 A gently netted golden trout, one of many trout caught then released by the author while fishing in the sierras.

The hike to alpine lakes offers incredible views and great fishing well worth the effort. However, the High Sierra can also be difficult to navigate and the weather can be finicky. Always be prepared. Take extra food, water, and layers. Be mindful of the risk of lighting strikes.

Golden trout, native to the Kern River Basin, are a thing of beauty, and the populations at higher elevations produce some intensely colorful fish. 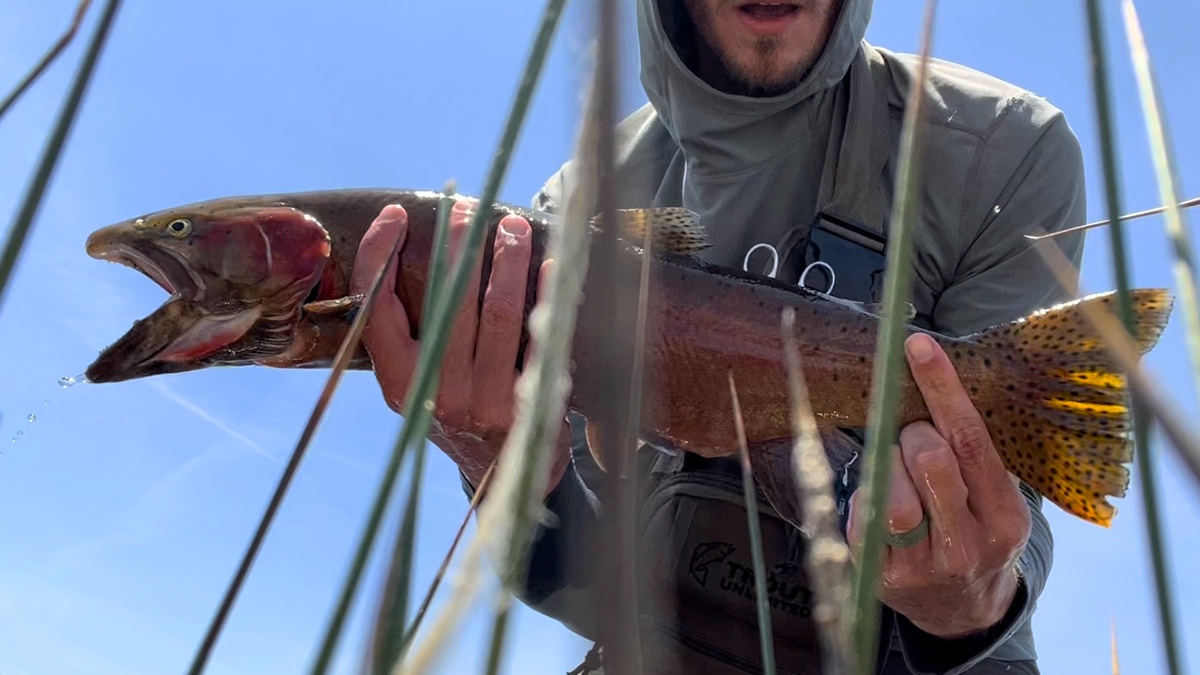 Spring fishing is heating up in the Eastern Sierra, and if you want to have a great Memorial Day weekend catching trout, come prepared! The cutthroats are on the tail end of their spawning run up the Upper Owens River from Crowley Lake, so your patterns are going to matter.

The cutthroats are actively running and spawning, creating an abundance of roe in the water. Just like you’d want to match a hatch, your best bet to catch a cutthroat right now is to offer them a salmon egg pattern. 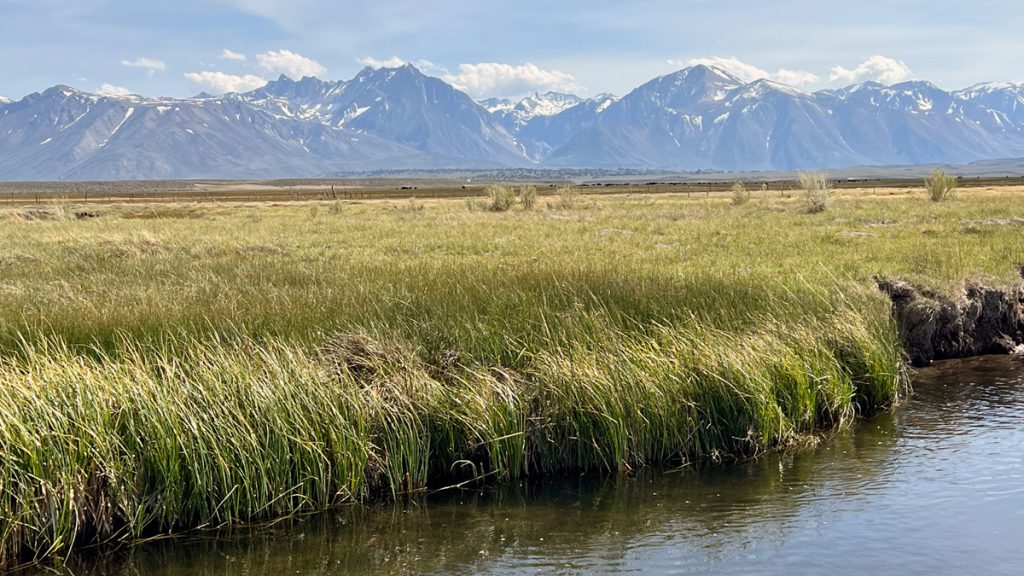 Epic views of the Eastern Sierra from the Upper Owens River.

We spent a few days running with the fish up and down the river, throwing a variety of wet flies and trying to figure out the most effective presentation. Nymphing may not be many people’s preferred style of fishing, but is the most effective method when targeting large fish during a spawning run. At the end of the day, we ended up pulling in a few nice fish.

When you get out there, it might be worth trying what we did to find some success, so be sure to use a setup including an indicator and some split shot. We had the most luck by using an indicator high on the leader, moving it frequently to match the water depth of the run you’re casting into, and using a worm pattern or salmon egg pattern above a salmon egg pattern tied on with about 24 inches of tippet. Attaching split shot halfway between flies was effective at giving the lower salmon egg a realistic presentation, allowing it to bounce around along the river bed. We had the most luck with peach and pink-colored patterns.

Work on your presentation so that you run a fly right into the face of the fish you are targeting. There was a short window each day when fish were aggressively feeding, but most of the time we had to make it as easy as possible for the fish to see, then take, the fly. The water is very clear in many places, so be careful not to spook the fish. 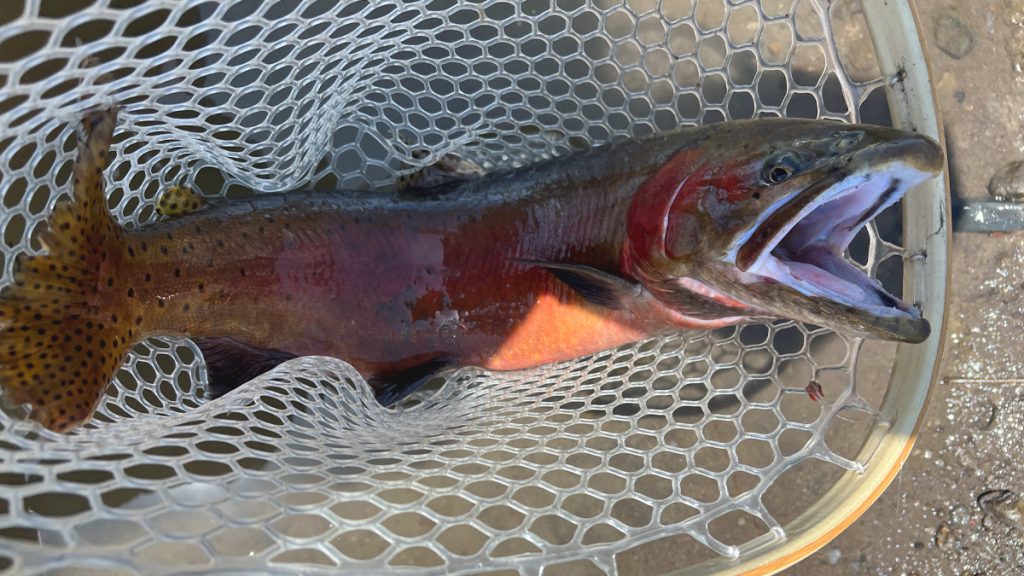 A nice Cutthroat, caught during the tail end of the spawn on the Upper Owens.

It is best to dedicate most of a day if you’re specifically targeting cutthroat, as the fish will behave differently as weather conditions change. In the three days that we spent on the Upper Owens, the fish were most active at a different time each day. Always be prepared to face high winds when fishing the Eastern Sierra.

As always, it is important to be aware of local fishing regulations. We fished the section of the Upper Owens above Benton Crossing, which is artificial lures, barbless, catch and release only. Fish are sensitive during a spawn, so give plenty of time to revive them after a hard fight and try to take them out of the water for as little time as possible before releasing.

Recommended gear:
5 or 6 wt rod and reel – perfect for casting along this smaller river
4x tippet – 5x may work, but can break if you hook a hog
Polarized sunglasses – Suncloud is a quality, affordable brand
Sun protection (there is no shade along the Upper Owens River) – my Mountain Hardwear Crater Lake Hoody is perfect for all my summer hobbies in the Eastern Sierra

Good luck out there!

Give it a Whirl

Splitshot and an indicator will help your presentation drastically during the spawning run.

There is no shade on the Upper Owens. Come prepared. Bring a hat, sunglasses, sun shirt, and water.